Would you let your children hop on a plane that has a 1 in 6 chance of crashing? 1 in 10? 1 in 100? Probably not, and you are right: the risk is too high for people we care about. In his recent book, The Precipice, Toby Ord estimates a 1 in 6 chance of a global catastrophe occurring this century, destroying all of civilization’s long-term potential. Such global catastrophic risks concern the entire world population and succeeding generations.

Just as we make policies to protect our children, the lives of their children’s children should also be of major concern for national and international policy communities.

One key to protecting future generations is to mitigate global catastrophic risks by building preparedness. Preparedness is defined by the UN Office for Disaster Risk Reduction as “the knowledge and capacities developed by governments, response and recovery organizations, communities and individuals to effectively anticipate, respond to and recover from the impacts of likely, imminent or current disasters”.

As the world temporarily ground to a halt in 2020, it became clear that we are not prepared for shocks worse than COVID-19. To prepare, we need policy change. This raises the question of what we know about the dynamics of policy change. And by extension, what these dynamics imply for attempts to achieve change.

This post attempts to elucidate the dynamics of policy change and presents eight principles to guide policy action for the reduction of global catastrophic risks. Our recommendations should prove useful to actors inside and outside of governments and international organizations.

Our motivation for writing this post comes from observing an increasing number of calls for preparedness which require institutional paradigm shifts of the kind that is observed mostly on centennial scales. Many of the risks that humanity is currently facing seem more urgent. We hope to contribute to accelerating the adoption of a new preparedness paradigm by reviewing what we know about policy change.

If you want to learn more about the risks themselves, there are many great resources:

The importance of climate change as a risk to human civilization has been evident since the 1980s. Yet, the policy reaction is not proportional to the known severity of the problem. Why is that? And does it apply to other policy problems, too?

Using the allocation of public budgets as a proxy, we can assess the frequency and magnitude of policy changes. Public budgets are imperfect yet insightful proxies of the priorities of governments and international organizations. When budget allocation changes, we can take this as some evidence of policy change. Of course, policy change can relate to variations other than budgetary changes (e.g. changes in institutional practices). Nonetheless, data on public budgets across nations and decades - sometimes even centuries - has provided insight on regularities in public spending behavior.

Empirical evidence on public budgets across time, regimes and organizational scales suggests that budgets either underreact or overreact to policy problems.

This means that public budgets change mostly incrementally with rare punctuations. What causes this regularity? Public budgets seem mostly insensitive to gradual changes in reality. With time, the mismatch between budget allocation and the importance of real-world problems increases. Then, suddenly, public budgets change drastically to ‘catch up’ with the change. This is why some scholars call incremental change ‘underreaction’ and punctuations ‘overreaction’.

The diagram below shows a hypothetical example to illustrate this dynamic. The blue line represents the importance of a given policy problem. Here we assume that the importance of the problem increases over the presented time frame. Take, for example, climate change over the past 50 years. As time has passed, the adverse consequences of climate change have become more likely and more severe. Whether this rate of change is linear or not does not matter for the sake of our illustration.

The red curve depicts the extent of policy change of a given government in relation to the same problem. Viewed through the lens of public budgets, it illustrates investment towards solving a given policy problem. As the problem gets worse, the mismatch between its importance and the government investment increases (grey area). Then, suddenly, large public budget changes occur and overcorrect for the previous mismatch. The diagram shows three periods of underreactions (labelled as A1, A2 and A3) and two periods of overreactions (labelled as B1 and B2). 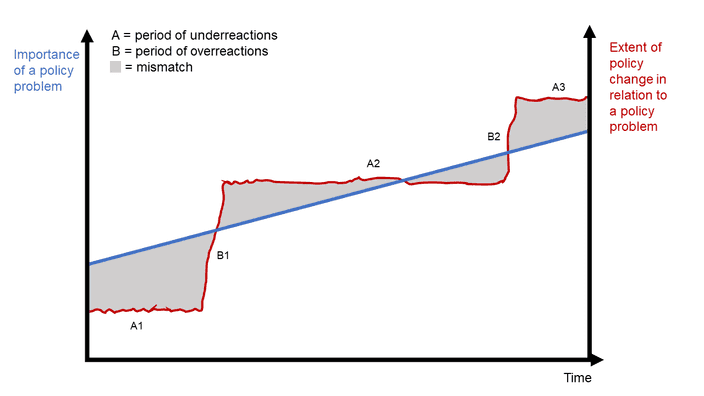 To provide a real-world example: before COVID-19, countries neglected the risk of global pandemics even though they are known to be highly damaging and occur regularly. Since 2020, extreme budget changes, with the goal of mitigating harm from COVID-19 and preventing the next pandemic, have become common. The mismatch between policy priorities and the importance of problems, followed by overreactions as soon as problems become salient, is a regularity we can observe globally across issues and regimes.

It is important to note that this dynamic of underreaction and overreaction is not necessarily bad. It might in some cases be an effective way that large political systems made up of heterogeneous groups have found to handle certain problems. Realistically, figure 1 would depict many blue lines representing various actors’ differences in perceived importance of a given problem. It takes time to navigate a complex space of problems collectively and prioritize what is seen as societally important. In the end, this modus operandi might well be necessary to act on a large scale. Taking COVID-19 as an example, the overreaction has - so far - proven sufficiently effective at avoiding civilizational meltdown.

While it is costly and arguably suboptimal for change to happen mostly when first damages have occurred, it might be an efficient way for current institutions to handle shocks while otherwise preserving stability.

Why does policymaking under- and overreact?

Overreactions can define policymaking for years to come. After an overreaction has occurred, it is common for policy changes to remain mostly incremental for a number of years, if not decades. Thus, rare overreactions redefine the reality within which policymakers operate for years.

While the specific reasons for policy change are contextual, there are important regularities. A common source of policy change lies in the dynamics of attention. Attention limits what an individual, group, or institution can consider important; it constrains the number of problems an actor can focus on at any given point in time.

Attention is limited and dispersed because individuals and institutions have limited processing capacity, despite there being a sheer infinite number of policy problems. The attention of actors is driven by their beliefs, values, emotions and by the attention of peers. Over time, actors may shift their attention from poverty reduction to reducing inequality, to climate policy, to pandemic preparedness. For large policy changes to happen, a significant portion of actors needs to allocate their attention to the same issue. Otherwise, underreactions are the result.

Overreaction happens because of at least two inter-related reasons.

Second, amplifiers increase the salience of problems. Amplifiers are positive feedback loops that further emphasize why selected problems are important, thereby motivating additional actors to focus their attention on them. Examples include the media with extensive public reach and policy entrepreneurs who are well-connected within policy networks. Policy entrepreneurs know how to make information resonate in policy arenas and instrumentalize events like natural disasters to achieve their goals. They can present problems in simple terms and connect them to the pre-existing belief structures of other actors. They have deep knowledge of policy processes, speak different policy languages and lead by example. When the media or policy entrepreneurs do not amplify a message, large shifts in attention are rare.

Using attention to explain policy change is a promising and fairly well-validated approach but attention is unlikely to explain the full story. This approach’s explanatory power hinges on the quality of available data and general scientific rigor. It is particularly difficult to provide an accurate explanation of general ‘system-level’ patterns (i.e. budget changes) through social mechanisms (interactions, belief dynamics, etc.).

What does under- and overreaction mean for avoiding global catastrophe?

Established policy actors have understood the dynamics of policy change. As a result, they spend a lot of their resources on building networks and learning how to design effective frames (i.e. presenting ideas in a compelling manner). They anticipate windows of opportunity or even create them, instrumentalizing exogenous events to achieve their goals. They sustain their engagement over time. They have teams monitoring policy activity, and collecting intelligence on what is being discussed, how, and how to participate in such debates.

Should the proponents of global catastrophic risk mitigation imitate such an effective strategy? Yes, and no.

Historically, drastic policy changes have very often happened as a function of external events, such as wars or natural disasters. This would imply that policy actors should wait for unusual events to trigger overreaction to then re-orient attention. However, this is not a valid strategy with global catastrophic risks for ethical and financial reasons. First, waiting for the first signs of a global catastrophe to manifest would likely harm millions of individuals and at worst could lead to reaching a point of no return beyond which civilization collapses. Second, even if we can react, reacting is often more costly than maintaining redundancy for crisis preparedness.

While the process of underreaction and overreaction might be imperfect, it might be functional for dealing with problems that do not risk collapse. It is a dangerous choice, however, when it comes to handling risks that could wipe out a large part of current generations and plausibly all future ones. Therefore, there is a need to reinforce preventive action.

From a short-term perspective, we cannot change the behavioral, social and institutional fabric that leads to under- and overreactions. This dynamic has been observed across contexts over the last two centuries. Therefore, without changing the core processes of institutions, mitigating global catastrophes requires at least the following:

While the short-term strategies are common practice, acting for future generations also entails an additional, longer-term strategy: changing processes. In the long-term, actors need to work on improving how current institutions incorporate and solve problems that primarily affect future generations through the following:

Last but not least, the above recommendations also imply a set of actions that policy actors who care about the long-term future should avoid taking. The following is a non-exhaustive list:

The underlying idea of this blog post is important. It goes further than reviewing the dynamics of policy change and sketching implications for policy engagement. The exercise was to (1) take a normative change related to the long-term future (i.e. improve preparedness), (2) check what the empirical evidence tells us how this change could manifest, (3) adjust expectations and strategies for going forward. We believe that without (2), policy actors who care about the long-term future would commit mistakes in (3) which could slow down the reduction of global catastrophic risks. Therefore, with this blog post, we want to motivate others to replicate the exercises on adjacent topics and contribute to build an empirically-driven field for long-term governance.